The Obama administration will soon ease some restrictions on U.S. travel to Cuba and other sanctions following Havana’s promise to free political prisoners, according to growing but unconfirmed reports.

Two persons close to the administration told El Nuevo Herald on Friday the decision has been made and will be announced in the next two weeks. Another said he’s heard the reports but cautioned they could be “trial balloons.”

The key change will be an expansion of educational and cultural travel, which accounted for about 2,000 visits in 2009, said two of the sources. Many academics have urged President Barack Obama to expand those visits, drastically trimmed by the George W. Bush administration.

One of them added that Obama also will restore the broader “people-to-people” category of travel, which allows “purposeful” visits to increase contacts between U.S. and Cuban citizens.

Though that category requires prior U.S. licenses for the trips, it is fuzzy enough to allow for much expanded travel to Cuba, the source added. All asked for anonymity because they did not want to be seen as pre-empting a White House announcement.

The people-to-people category was established by the Clinton administration but was closed in 2003 by Bush, both because of his more aggressive policies toward Cuba and complaints that too many people were abusing it for purely tourist trips.

Another change will be permission for U.S.-Cuba flights from all of the about 35 U.S. airports that have top-level security arrangements, according to two of the sources. Cuba flights are now approved only for Miami, Los Angeles and John F. Kennedy airport in New York.

Obama also will make it easier to pay in the United States for telephone and other services rendered in Cuba, the sources added, in hopes of increasing communications between the island and Cuban exiles.

Francisco “Pepe” Hernandez, president of the Cuban-American National Foundation, told El Nuevo Herald he could not confirm the reports but noted that CANF opposes U.S. tourism in Cuba but favors easing the travel restrictions.

“For a long time we have been making an effort with the (Obama) administration to extend the licenses and spectrum of people-to-people travel because we believe this is a proactive measure that is going to help to provide people in Cuba with the support they need,” he said.

Mike Hammer, spokesman for the White House’s National Security Council, said only that the Obama administration “will continue to pursue policies that advance the U.S. national interest and support the Cuban people’s desire to freely determine their country’s future.”

But the reports drew quick condemnations from opponents of easing sanctions, who all noted that U.S. government subcontractor Alan Gross and at least 30 political prisoners remain jailed in Cuba.

“This is not the time to ease the pressure on the Castro regime. They have made no significant concessions that should be rewarded,” said Sen. Bob Menendez of New Jersey, a Cuban-American and head of the Democratic Senate Campaign Committee, a powerful post in an election year.

“Promoting travel and widespread remittances will give the regime a much-needed infusion of dollars that will only allow the Castro brothers to extend their reign of oppression and human rights violations,” Menendez added in a statement.

Some fall under “general licenses” that do not require prior U.S. approval, but most require applications for “specific licenses” issued by the Treasury Department’s Office of Foreign Assets Control.

The “people-to-people” travel, if it is restored, would require specific licenses, but the president has the power to change it into general license, said Robert Muse, a Washington lawyer who follows U.S. sanctions on Cuba closely.

Congress has been considering a bill that would lift all U.S. restrictions on travel to Cuba. Its backers insist it has a good chance of passing, though congressional staffers monitoring the bill say it’s short of the needed votes.

One of the three sources said the easing of the travel and other restrictions is the Obama administration’s “calibrated response” to the Raul Castro government’s promise to free at least 52 political prisoners by September. More than 20 already are free.

Because the changes will be the result of presidential decisions, rather than changes in the maze of U.S. laws regulating relations with Cuba, Obama “can backtrack if it all goes bad,” he said.

One Democratic Party operative in Miami said, however, that any decision to ease the restrictions would not be a reply to the Castro promise, but rather a continuation of the Obama policy of doing whatever he believes benefits U.S. interests in Cuba, no matter what Castro does.

The operative said he was not worried that Cuba might complain that the Obama changes would be a too-meager response to Castro’s promise to free the 52 political prisoners – the biggest such release since 1998.

“The last thing we want is Cuba saying, ‘Thanks, Obama,’ ” said the man, who asked to remain anonymous because he was not authorized to speak on Obama policies.

Puerto Rico requires all travelers to fill out a Travel Declaration Form that the health department has available in an online portal and get a nasal or throat swab test for COVID-19 “no more than 72 hours prior to visiting the Island” https://t.co/yPnlcsLSFv

The travel restrictions between the United States and Canada has been extended by another month. https://t.co/IQelZMJBuS

Even if you’re fully vaccinated, all travelers returning to the U.S. must show proof of a negative COVID-19 test taken within three days of boarding their return flight. https://t.co/W9jfbClmqx 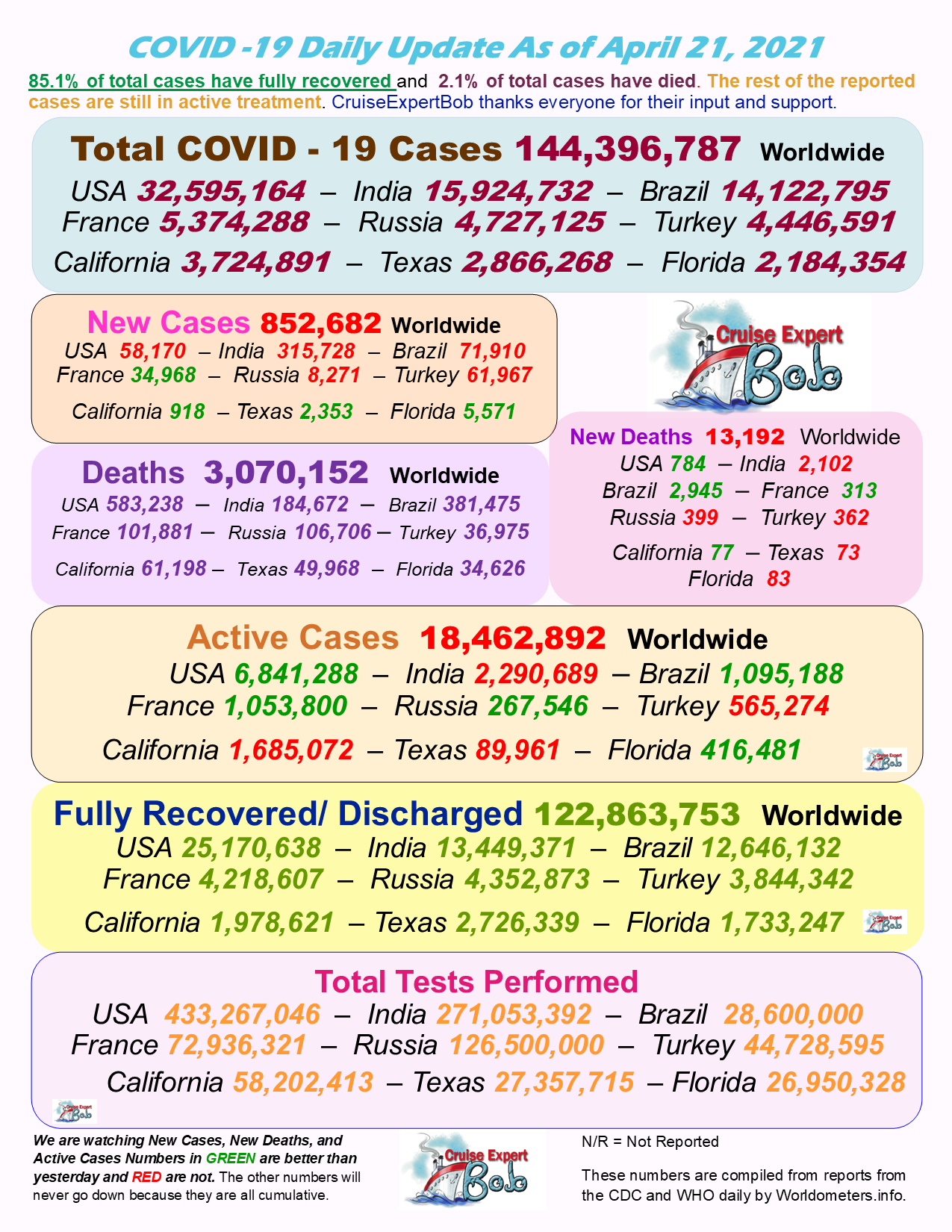 Royal Caribbean has announced that its fifth Oasis-class ship, Wonder of the Seas, will have not seven, but eight neighborhoods for the first time. https://t.co/tQ6Caal1BQ