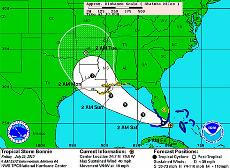 Carnival says the Baltimore-based Carnival Pride is skipping a port call scheduled for today in Freeport, Bahamas to avoid the storm. The 2,124-passenger ship instead will remain at sea.

Carnival says another of its vessels, the Carnival Destiny, is skipping a port call scheduled for today in Key West and instead heading straight to its next stop, Cozumel. The 2,642-passenger ship will visit Cozumel on Saturday and switch its Key West visit to Sunday before returning to Miami on Monday morning.

Royal Caribbean’s 1,950-passenger Grandeur of the Seas also is skipping a port call scheduled for today in Key West and heading straight for Cozumel. Royal Caribbean spokeswoman Cynthia Martinez tells USA TODAY the line has yet to decide whether the ship will stop in Key West on its way back from Mexico.

As of 8:00 AM EDT, Bonnie was about 75 miles east of the town of Marathon in the Florida Keys and moving to the west-northwest at about 19 miles per hour. The storm has maximum sustained winds near 40 miles per hour.

The National Hurricane Center says Bonnie could strengthen modestly over the next two days as it moves into the Gulf of Mexico, but for now it is not expected to grow into a hurricane. The Center forecasts the storm will make landfall somewhere between eastern Texas and Alabama on Sunday.

If you know going into your trip that there will be kinks, you’ll be better able to handle them. Arrive at least 3 hours early at the airport. There will be long lines to check bags and get through security. Don’t be surprised if y…https://t.co/d0qiL3ngAg https://t.co/VxU4ECz16Q

With a virtual private network (VPN), you can maintain your privacy while you surf, shop and bank online. It’s a great way to protect yourself from hackers and snoops on public networks. But there are countless VPN providers out th…https://t.co/gH3spJpVQ2 https://t.co/Ri1QyYqStL

The 3-1-1 designation is a simple way to remember these numbers: individual liquid containers must be 3.4 ounces or smaller, they must fit into one clear, quart-size bag, and there is only one bag allowed per passenger. https://t.co/MWJmVqoDGF