Cruise line ads promise all the best things in life if you take one of their ships for a cruise. It remains probably the best value in vacationing because a cruise includes all meals aboard ship, your entertainment and events aboard ship. Your stateroom is also included and its amenities vary with the price you pay. Some cabins do not include a window or porthole. These are usually the lowest priced rooms on the ship. They are referred to as interior rooms. From this category you can move up to a room with a view, which I recommend because you can at least see if the weather looks agreeable or if it’s raining. You can also see where you are, usually. Then, most ships today offer staterooms with private balconies equipped with two chairs and a table. This I would recommend if your budget permits. It allows you to be outside in a quiet surrounding with only the sound of the sea below. Then, you can move on up to various categories of suites with a lot of room and large balconies.

Location, location, location is the key to a good ride on a ship. Study the deck plan of the ship you choose to cruise in and make sure you aren’t assigned a cabin under or over or next to an entertainment venue that has a loud band or plays recorded music into the wee hours of the night. And, you don’t want to be under the pool deck with banging from dancing, parties and other activities during the day or night.

Some cruise lines will offer a guarantee of a category without the cabin being assigned until just before departure. They say you will get the best available cabin in a particular category. This often ends up being a cabin in a poor location such as the extreme front of the ship or almost at the back end of the ship where the ride is not the best.

Dining aboard ship is also included in your ticket — offering three regular meals per day plus buffets and other selections at various times of the day. Spirited beverages are usually not included along with bottled drinks such as Cokes, etc. Most cruise lines also have available special menu dining rooms that charge extra per meal. These are usually up-scale venues with great dining opportunities serving food similar to the best restaurants in a major city in the U.S. Extra charges for these dining rooms vary from $20 to $75 per person per meal. It’s often worth the extra fees to enjoy at least one dinner away from your assigned dining room and soak in the luxury of a great meal with a bottle of fine wine.

Sightseeing in your ports of call is usually not included in the price of your cruise. A few cruise lines do include all sightseeing and this will be clear in the brochures. Sightseeing seems to get more expensive with each year I have been cruising. You will find a three-hour excursion can run from $45 to more than $100 per person. It depends on how expensive the city or country is where you are visiting.

Entertainment varies with the cruise lines. You can usually expect a small band or trio playing favorites in various public rooms of your ship in the evenings. Nightclubs aboard ship usually offer more spirited music later in the evening as well as recorded rock, etc. Smaller ships that are also upscale in price and formality present more mild entertainment in their show rooms as well as music for dancing and cocktail hours. The very large mass-market cruise ships offer Las Vegas-type entertainment with rather large casts, which are often memorable. These are also included in your cruise fare. The smaller ships do not have stage space for such grand entertainment.

Some cruise lines will theme a few cruises — for example: cooking classes, opera, jazz, country music, the big band era, movies, etc. These will also be listed in the cruise line brochures.

Tipping varies with each cruise line and it is usually spelled out in the cruise line’s brochure. In the mass-market arena the gratuities are charged to your shipboard account and can run from $10 per day on up to $12.50 per day per person. Not cheap, but when you consider the amount of service you are receiving in almost every area of the ship it is worth it.

You simply must build this expense into your vacation budget. I still would prefer the old method of handing out envelopes to those who served me in the dining room and the room steward who kept my room tidy and clean, but those days are gone.

So many different cruise itineraries are available to the public these days. Those that have been popular for many years would include: Alaska, Caribbean, Mediterranean, Baltic, and Greek Islands, to name a few. The Panama Canal is always popular along with longer cruises around South America, South Pacific and Asia. Mexico was once popular, but most cruise lines have pulled out of that market since all the problems have developed.

I like Royal Caribbean, Holland America Lines, Princess and Celebrity cruises. Others would include Azamara Club Cruises, Oceania, Paul Gauguin in Tahiti, MSC Cruises, along with several others. Each cruise line caters to various lifestyles and budgets. The mass-market ships of Royal Caribbean, NCL and Carnival are very large and spirited. Many lines are quieter with less in-your-face gaudy interiors. All cruise lines give you a lot for your money. As a rule the smaller the vessel, the quieter and more conservative it is. The entertainment may consist of a string quartet playing Bach and Mozart. There may be a harpist playing during dinner. It’s all up to you and your taste, which cruise line and ship you select. However, selecting the right ship is important. Be sure you state to the travel agent or cruise line reservation person what type of bed arrangement you prefer i.e., twin beds, double bed, etc.

As we have stated in previous articles, it is very important to purchase travel insurance for your vacation, especially cruising. A cruise is a major investment for most people and insurance is peace of mind. Make sure it includes at least $50,000 for ship evacuation in case a helicopter is required to take you off the ship and fly to the nearest hospital. Ships have medical personnel and hospitals, but not as complete as many on land in most cases. Read the fine print in regard to cancellation and delays. Read every sentence in the contract and be sure you understand it. If not, consult someone who is knowledgeable.

Lastly, use an experienced travel agent in all cases. Most are familiar with the various ships and can advise you. They can also recommend an itinerary after speaking with you and your travel companions. They will go over the pluses and minuses of each ship and itineraries and time of year to travel.

The travel agents get feedback from their clients and other agents on what ships to recommend, plus they travel on the ships from time to time themselves. Be sure to tell your travel agent or cruise line reservation person if you or your companion are celebrating a birthday, anniversary or other important occasion while on your cruise. The dining steward will usually make a big “to-do” of it with a special cake or other recognition.

Cruising is my favorite way to vacation. The ship moves while I am relaxing, reading, viewing movies, dining, being entertained and gives me interesting places to visit. I don’t have to fight my way on the highways, and check in and out of a hotel or motel each night. I have the same lovely room each night and have a little chocolate on my pillow before going to bed. What could be nicer? And, I don’t have to clean up the room! Anchors Away!

The air traffic control tower at St. Pete-Clearwater International Airport was closed until at least Jan. 31 by the Federal Aviation Administration after staff members tested positive for the coronavirus. https://t.co/6sa7FEStfx

As the most traditional specialty restaurant at sea, steakhouses are available on most ships, here's a look at some of the top steakhouses onboard: https://t.co/8fEMKWnC6C

This raises the prospect that proof of inoculation or immunity could be the golden ticket to rebooting travel https://t.co/Q4vW3RyLoJ 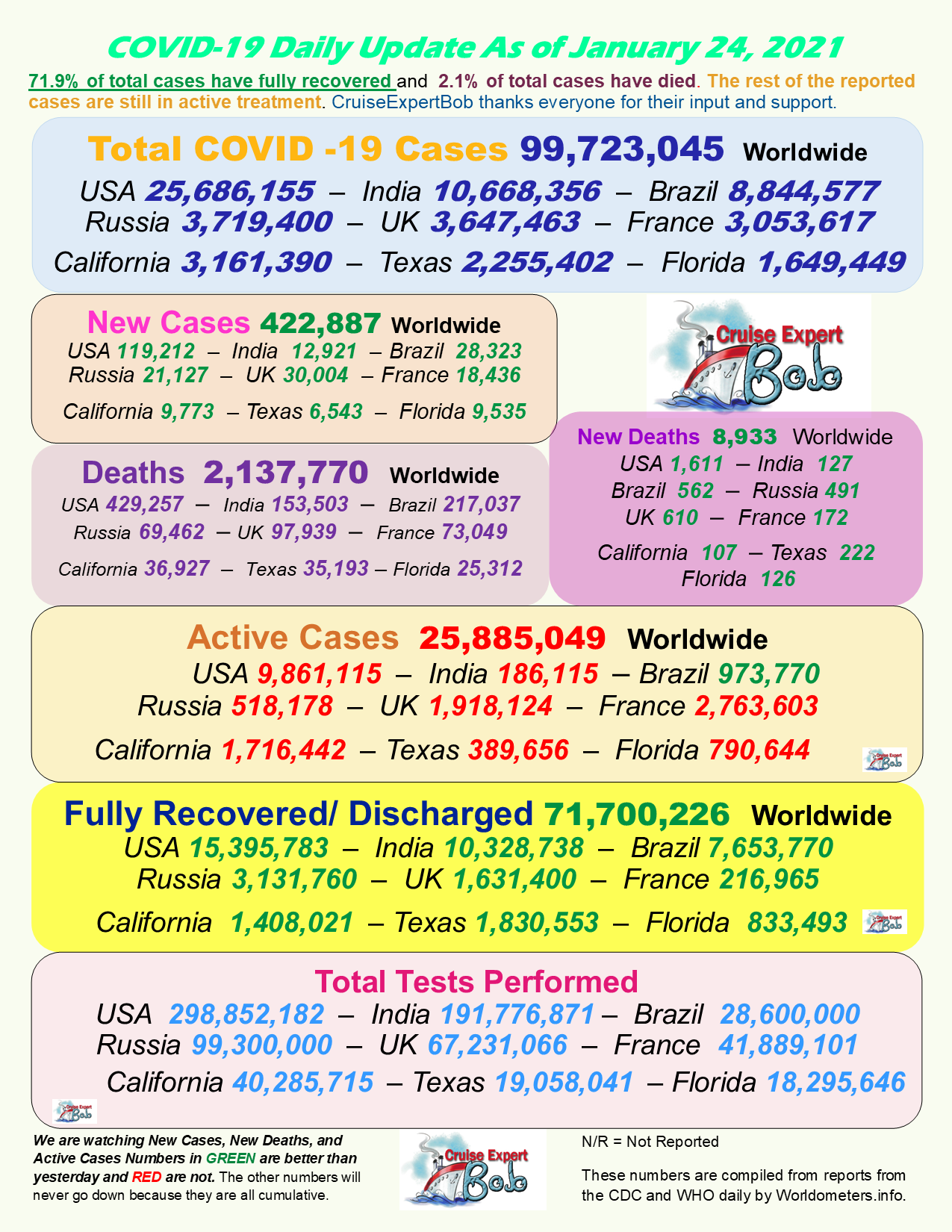 Norwegian Cruise Line and its Regent Seven Seas Cruises brand will be asking all of its crew members to receive the COVID-19 vaccine prior to boarding, the cruise companies' spokespeople told Insider in an email statement. https://t.co/AAjOMmnbDx