What worries cruisers the most these days when heading off on a voyage? For many, it’s the prospect of a travel delay that causes them to miss their ship, says Mark Conroy, president of Regent Seven Seas Cruises.

“One thing we hear consistently from customers is that there’s angst in getting to the ship in time,” Conroy tells USA TODAY. And it’s only getting worse as airlines run ever more full, he says.

“It used to be that if you missed your flight to London, there were three more planes to London (later in the day) with space on them, but the problem is that now that’s not the case,” Conroy says. “If you miss your flight you can end up being stuck overnight.”

Growing worries over flight delays is one reason Regent Seven Seas in October announced it would offer passengers a free night in a hotel before every cruise, so that passengers could book their air travel to ships a day earlier than needed as a precaution against missing the voyage.

The luxury line, which bills itself as the most all-inclusive, already folds everything from alcoholic drinks to gratuities and taxes into its fares, and the free hotel offer is an extension of the concept, Conroy says. But it also was a response to changing customer needs.

In addition to a one-night stay in a deluxe hotel in the city from which their cruise is originating, Regent customers now get included transfers from the airport in the city to the hotel, transfers the next morning from the hotel to the cruise ship and breakfast at the hotel.

Customers who don’t want the hotel package can opt for a $300 per person credit, but in a sign of the times, Conroy says 75% of customers so far are taking the line up on the pre-cruise hotel offer.

With the pre-cruise hotel stay, “guests now don’t have that angst about arrival,” Conroy notes. “It gives that comfort that they’ll get to the ship in time.”

For some older Americans, securing a Covid-19 vaccine appointment is quickly followed by their next booking: for a long-awaited trip. https://t.co/sIuyn6pIwr

With COVID-19 vaccinations on the rise and the number of cases in decline, the signs are looking up that cruising will return soon https://t.co/Tl6XUCxqr0

World cruises as well as grand voyages of 35 to 80 days are a hot trend right now, thanks to pent-up consumer demand for 2022 and 2023 voyages. https://t.co/oBRO4Ugilp

COVID -19 Daily Update As of February 25, 2021 78.5% of total cases have fully recovered and 2.2% of total cases have died. The rest of the reported cases are still in active treatment. CruiseExpertBob thanks everyone for their input and support. https://t.co/A5vDhyVrfU 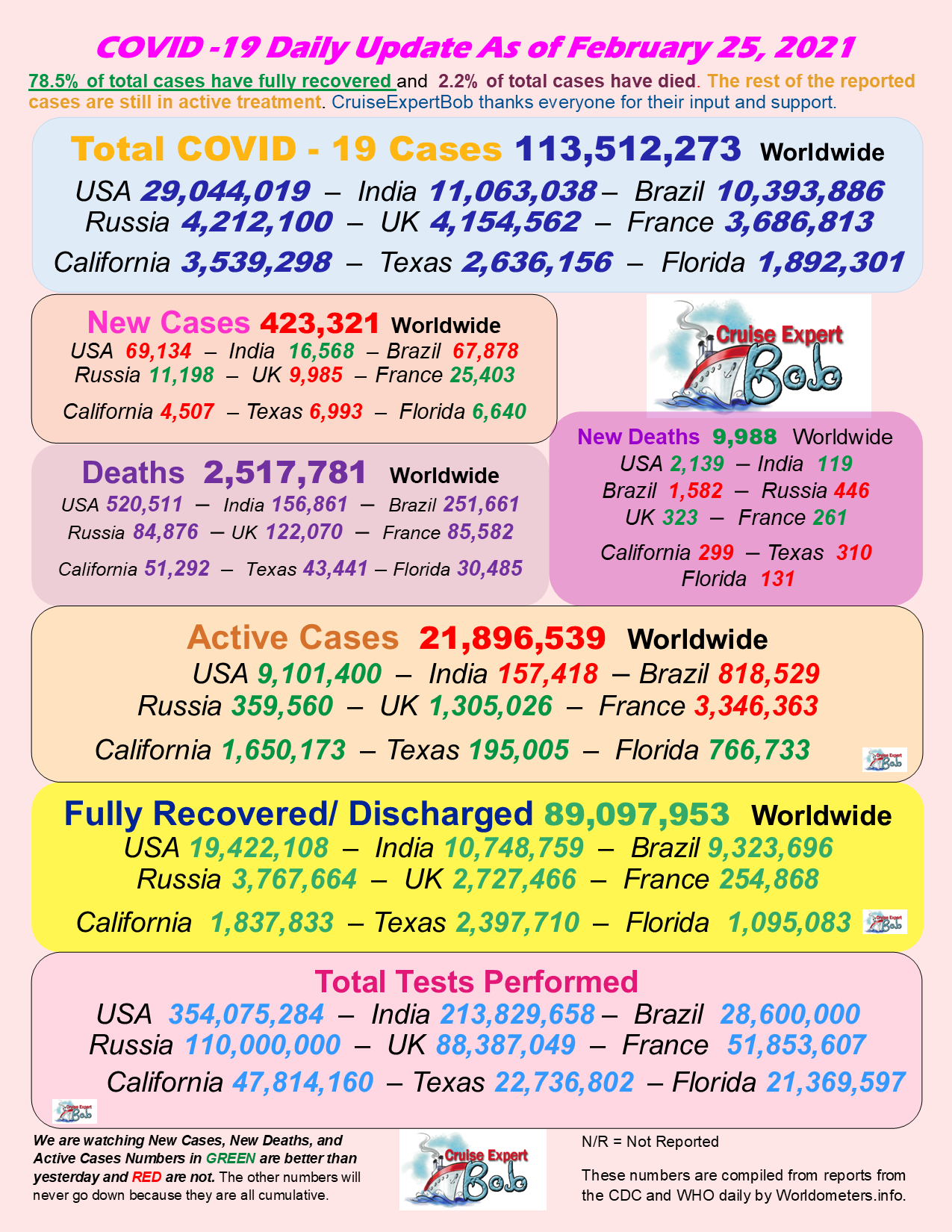