Most travelers get no closer to a world cruise than browsing through brochures in an armchair fantasy.

But you might be surprised at 2012 world cruise prices. Does $20,000 seem unreasonable for a three- to four-month experience of a lifetime? Granted, that is the entry-level price, (an inside cabin on a mainstream cruise line), but if that won’t do, you can book a master suite on a luxury cruise line for $262,000 per person, double occupancy. What’s the difference between the two? Let’s take a look.

Cruise lines have offered world cruises for decades, traditionally leaving in early January and sailing 100 days or more. Next year travelers will have nine world cruises to consider, but with an unexpected wrinkle: Most of them don’t circumnavigate the globe, which used to be the definition of “world cruise.” Still, this does not make them any less appealing…just the opposite, in fact.

Crossing large bodies of water takes time; Los Angeles to Honolulu takes four days and five more to reach Tokyo. This year, most world cruises will start in one continent and end in another.

Here are the world cruises for 2012 beginning with the best values:

Holland America Amsterdam sails 112 days from Fort Lauderdale on Jan. 6, 2012. It cruises as far south as the Antarctic Peninsula with stops in Rio and Buenos Aires on the way. After the Cape Horn challenge and Chilean fjords, cruisers move to the South Pacific, Southeast Asia, India, the Red Sea with stops in Egypt and Jordan, a transit of the Suez Canal, a stop at the French Riviera and finally end Fort Lauderdale.

Princess Cruises is offering two world cruises this year. The smaller (700-passenger) Pacific Princess starts its 107-day adventure on Jan.13 in Fort Lauderdale. It transits the Panama Canal to San Diego, Hawaii, the South Pacific and Asia, then sails through the Suez Canal to the Mediterranean Sea and ends in Venice. Prices start at $17,596 or $23,195 for a verandah cabin.

The line’s larger Sun Princess has scheduled a 104-day cruise departing May 16 from Sydney and continues on to Singapore, India, Dubai and Egypt. Passing through the Suez Canal leads to 20 days in the Mediterranean and northern Europe before the ship touches Iceland on the way to New York. It sails through the Panama Canal to Los Angeles, visits Hawaii, Tahiti and New Zealand and then heads home. Prices start at $19,994 inside and $29,994 for a balcony stateroom.

Cunard Line offers the most elegant ships at similar mainstream prices. The 107-day voyage on Queen Elizabeth starts Jan.10 in Hamburg, transits the Mediterranean, the Suez Canal, Southeast Asia, Australia, the U.S., the Panama Canal and ends in New York. It starts at $23,883 per person, and balcony cabins ring up at $31,104.

Queen Mary 2 sails a 108-day cruise from Southampton, Jan.10, which circles Africa, visits Indonesia and Australia. Inside cabins are $19,578 and Britannia balcony staterooms come in at $23,328.

Luxury lines include all beverages and gratuities in the cruise fare, which can certainly add up on a world cruise. These lines also feature true gourmet cuisine and the best service.

The 94-day “world cruise” on Crystal Serenity really just circles the Pacific Rim. It sails on Jan. 18 and starts out in Los Angeles, visits Hawaii and Australia, followed by six weeks in Asia from Bali to Tokyo. From Petropavlovsk, Russia, it crosses over to Dutch Harbor and other Alaska ports before returning to Los Angeles. Fares start at $50,905 and range as high as $250,355 for the Crystal Penthouse.

Seabourn Quest, the line’s newest ship, leaves Fort Lauderdale Jan. 5 on a 109-day world cruise. It heads south to Rio and crosses the Atlantic to Namibia and South Africa. After an Asia sojourn, the ship doubles back in Shanghai for stops in India, the Arab states, the Red Sea for Egypt and Petra, on to the Mediterranean for calls at Corfu and ends in Venice. With rates starting at $47,800 for a verandah suite, it is a relative luxury cruise bargain.

Silversea Cruises has a surprisingly similar itinerary to Seabourn, it also starts in Fort Lauderdale but a day later (Jan. 6), crossing from Rio to Namibia and doubling back in Shanghai. The cruise is 116 days and ends in Monte Carlo. Fares start at $59,585 for a Vista Suite, with the owner’s suite costing $214,093.

Here is my top pick if time and money are no concern: Regent Seven Seas has a 139-day itinerary that is not marketed as a “world cruise,” although it is the most extensive cruise of 2012. It starts Feb. 7 in Auckland, New Zealand and ends in Copenhagen. Amazingly, this cruise spends 110 of those days in ports, and shore excursions are included in the price of the cruise (this is not the case for other luxury cruise lines).

Compare this to the other cruises, with only about 40- 60 days in port, and there is a world of difference in terms of travel adventure. Personally, if I am cruising on the other side of the world I want to see what’s on shore, not just stay on the ship for 60 days.

The Regent cruise is pricey, starting at $78,999, with the master suite costing $262,799. But this is the most inclusive and extensive world cruise available. From New Zealand it visits Australia, Indonesia, Thailand, India, the Arab states and Israel, the Mediterranean, Europe’s Atlantic coast, Iceland, the U.K., Norway and finally Denmark. 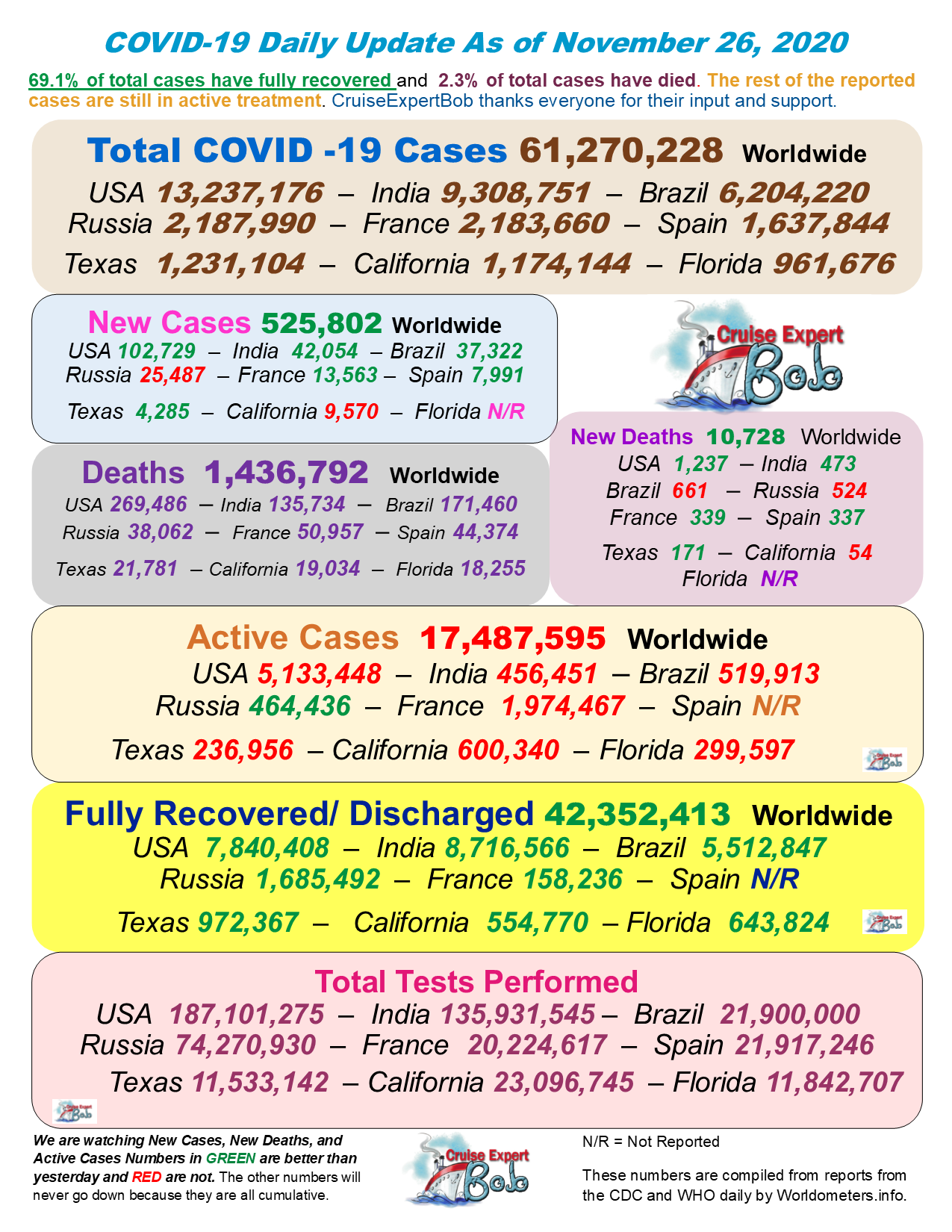