Princess Cruises’ next ship, the Royal Princess, will have a sprawling, two-deck outdoor sports zone with such unusual-for-cruise-ship attractions as a baseball batting cage and a simulated laser shooting range.

Princess Sports Central, as it’ll be called, will revolve around a center court that can be used for basketball, tennis, volleyball and badminton, and also boast a driving range facility for golfers.

The plans for the giant sports zone, revealed today, also include a faux grass area called the Lawn Court to be used for golf putting, bocce ball, croquet and lawn bowling. Another nearby area, the Game Lounge, will offer such games as table tennis and virtual gaming with Kinect systems. The Sports Central complex will be located on Decks 18 and 19.

RELATED:  Next Princess ship to have working television studio

Princess says Royal Princess staff will be on hand in the sports zone to organize competitions and group games.

Princess today also revealed that the Royal Princess will have a large indoor fitness center and aerobics studio on Deck 17 that features sweeping ocean views. A private aerobics studio at the back of the area will be a first for Princess. It’ll be home to TRX suspension training, MyRide indoor cycling and what the line is calling Body Sculpt Boot Camp — a workout that burns up to 700 calories in the 40 minutes. The Royal Princess also will have a two-lane jogging track on Deck 18 with separate paths for walkers and runners. Outdoor exercise stations will be located around the track.

Scheduled to debut in June 2013, the 3,560-passenger Royal Princess will be the largest Princess ship ever built and the line’s first new ship since 2008.

Only the Pfizer COVID-19 vaccine is approved for those under 18 — and you might have to travel to find it. https://t.co/GpQ3Rj7X2X

COVID -19 Daily Update As of February 28, 2021 78.7% of total cases have fully recovered and 2.2% of total cases have died. The rest of the reported cases are still in active treatment. CruiseExpertBob thanks everyone for their input and support. https://t.co/eJjBmcyNe5 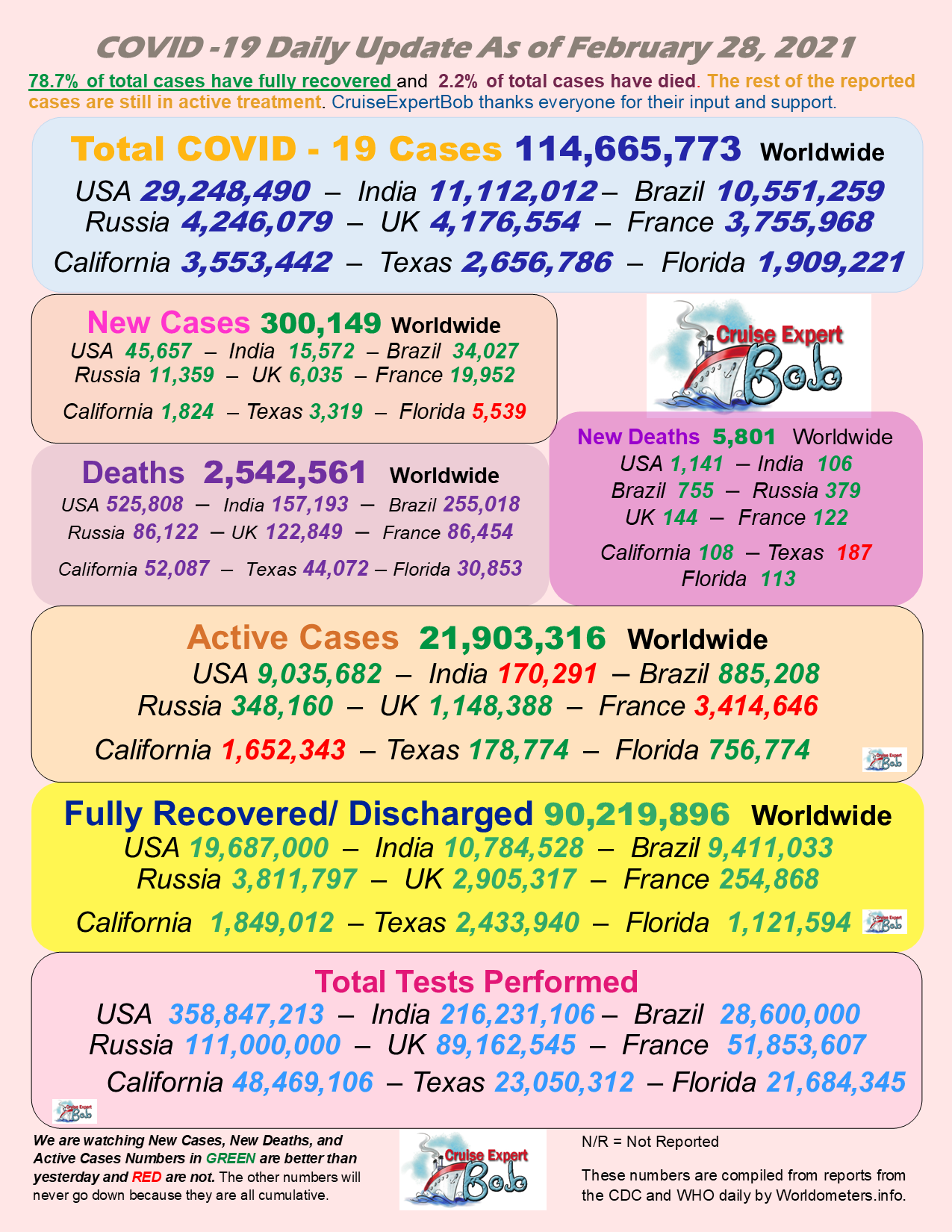 Royal Caribbean may move its home port to Cozumel, Mexico amid delays to restart the cruise industry in the United States. https://t.co/VsucxYAozT

When cruise lines initially restart operations out of U.S. ports, presumably later this year, they are likely to only restart with a few ships, each operating at only partial capacity. That’ll create a squeeze on the number of avai…https://t.co/00vw5eRvBP https://t.co/Y7JiAZ8SY9

Odyssey of the Seas began her conveyance to the North Sea early on Saturday morning to delight of many cruise fans. https://t.co/rRmnUFLG9E