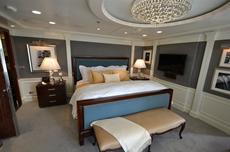 An example of the bedrooms found in Owner’s Suites.
ABOARD OCEANIA CRUISES’ MARINA — A labor of love.

That, in a nutshell, sums up what the 1,250-passenger Marina has been to Oceania Cruises’ founder Frank Del Rio and president Bob Binder — and it shows.

The eight-year-old line’s first newly built vessel — unveiled this week to travel agents and the media — is chock full of elegant and personal touches, from the oak wood floors in the ship’s Jacques Pepin restaurant (salvaged from a barn near the famed French chef’s hometown) to the centrally located Grand Staircase commissioned from Lalique.

Del Rio and Binder reportedly had a hands-on role in the choosing of nearly every piece of art, furniture and fabric on the 66,000-ton vessel, and no expense, it seems, was spared to make it a showpiece for the upscale line.

What stands out the most on Marina? Here, after several days on board, a list of five things we love (in addition, don’t miss our new comprehensive photo tour of the ship, which shows the areas mentioned below):

1. Good eats. Cuisine always has been a focus at Oceania, but the line has taken things up a notch with Marina, which boasts four intimate specialty restaurants open for dinner in addition to the main Grand Dining Room. Augmenting Italian eatery Toscana and steakhouse Polo Grill, found on earlier Oceania ships, is the line’s first Asian outlet, Red Ginger, and Jacques Pepin’s French-serving Jacques (the latter the first restaurant at sea for the noted chef). All four of the restaurants are available by reservation at no extra charge, a hallmark at Oceania.

2. Comfy rooms. Oceania has gone out all with its cabins, which are spacious, comfortable and stylish. The line notably brought in big-name designer Dakota Jackson to create the look for many of the ship’s top suites, and standard balcony cabins boast sitting areas; large, granite-lined bathrooms; and faux teak-floored balconies with premium furniture (at 282 square feet, the rooms are billed as the largest standard balcony cabins in the industry). The most exclusive accommodations on the ship, the Owner’s Suites, measure more than 2,000 square feet and are appointed top-to-bottom with Ralph Lauren Home furnishings, fabrics, lighting and bedding.

3. Lovely pool deck. Oceania bills itself as an “upper premium” line — a step up from “premium” operators Celebrity, Princess and Holland America — but the Marina’s teak-lined pool deck is closer in feel to what’s found on the ships of far pricier luxury lines. An elegant cross-shaped swimming pool flanked by twin whirlpools is surrounded by Balinese day beds and plush lounge chairs that give the deck an upscale flavor. Adding to the ambiance: Pool attendants cover the lounge chairs daily in soft white towel covers. There’s also a perfectly placed bar to one side of the deck and, across the way, an unusually-stylish-for-a-pool-deck, table-served outdoor eatery that offers made-to-order grilled items.

4. Bon Appetit Culinary Center. Billed as the first hands-on cooking classroom at sea, this glass-walled room overlooking the ocean offers 18 fully equipped cooking stations where would-be chefs can sign up for training with masters of the trade. Want to learn how to make a tasty tzatziki and great gazpacho (two of the items on the menu this week) while gliding past sun-kissed islands in the Caribbean? This is the ship. Classes start at $49 per person.

5. Serene spa. With sea foam green tiles, mahogany floors and other soothing decor, Marina’s Canyon Ranch SpaClub — an off-shoot of the well-known Canyon Ranch spa in Tucson, Ariz. — is an oasis of tranquility that includes a secluded deck with cushioned sun beds and a pair of hot tubs. A wide menu of treatments, from massages and scrubs to wraps, facials and even acupuncture, is available, and there’s even a “spa butler” on call to assist passengers with any special need.