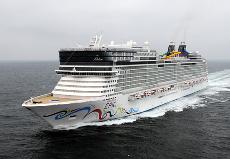 And the verdict is … it’s a winner, sort of.

After three weeks of inaugural activities during which it has been seen by thousands of travel agents and travel writers, the early word on the much-awaited Norwegian Epic — one of the largest cruise ships ever built — is that it’s a fun, lively ship that, alas, has a few major flaws.

“The entertainment was excellent,” says longtime cruise seller and industry expert Stewart Chiron of CruiseGuy.com, who spent two days aboard the 4,100-passenger vessel this past week during a preview voyage. But “the pool area was a big disappointment.”

Chiron tells USA TODAY the ship’s signature Cirque Dreams dinner show may be one of the best ever on a ship, and Epic definitely is taking shipboard entertainment up a notch by bringing in such Las Vegas acts as the Blue Man Group. But spectacular water slides aside, the boxy pool area design was a “throw-back to the late ’80s.”

Chiron also notes the 153,000-ton vessel has “many areas of mass congestion,” unlike rival Royal Caribbean’s similarly passenger-heavy but better-designed Oasis of the Seas. The crowding, he says, “needs immediate attention” as it’ll only get worse when the ship begins sailing full instead of a bit over half-full as in recent weeks.

Still, the most-often heard complaint from travel agents and writers who have seen Epic is over its unusual “new wave” cabin configuration in which the bathroom is broken up into pieces — an attempt to make the rooms feel more spacious. In the typical Epic cabin, the toilet is on one side of the main door (semi-hidden behind a sliding frosted-glass screen), the shower on the other side of the door and the sink closer to the middle of the room near the bed (click HERE for an array of photos showing the rooms).

“Once inside the balcony stateroom, well, I sounded like Nancy Kerrigan after she was hit in the knee with a crowbar – why, WHY, W-H-Y!!!???,” writes ExpertCruiser.com‘s Anita Dunham-Potter in a story on first impressions of the ship. “What a design disappointment these New Wave staterooms are.” 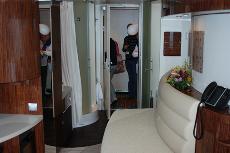 A balcony cabin on Norwegian Cruise Line’s Norwegian Epic.
Cruise writer Anne Campbell of shipcriticblog.com agrees, saying the unconventional bathroom arrangement in cabins could be a deal-breaker for some vacationers thinking of booking the vessel.

“While a couple may be fine with this arrangement, it may be a problem for families sharing a stateroom,” Campbell writes in an otherwise relatively upbeat review that praises Epic’s entertainment, food and service. “Kids probably don’t want to see mom and dad parading around in towels.”

Travel agent Becky Piper of CruiseOne in Strongsville, Ohio tells USA TODAY she also was a bit perplexed by the cabin design but not enough to send her clients elsewhere.

“The bathroom set-ups on Epic can certainly present challenges, but that alone will not keep me from booking my customers on Epic,” she says after a two-day visit to the vessel. “The ship had so much to offer in terms of entertainment, food choices, the neat casino layout and of course, the (first ever at sea) ice bar. I think it will be a great fit for a lot of my clientele.”

A number of travel agents and writers contacted by USA TODAY noted unusually short beds in cabins as a surprising flaw. Shipcriticblog’s Campbell calculates passengers over 5′ 11″ tall will find their feet sticking off the end of beds while sleeping. The cabins also drew criticism, in general, for being too cramped.

“I really do not see putting four people in that room,” travel agent Danielle McKee of Cruise Travel Vacations tells USA TODAY after staying in a deluxe balcony cabin. “We could barely move with two people in the room.”

One big exception to the griping over Epic cabin design among travel agents and writers comes when the conversation turns to the ship’s 128 “studio” cabins for single travelers — a rarity in the cruise world (click HERE to see an array of extra-large photos of the rooms).

“I fell in love,” McKee says of the cozy hideaways with super modern decor, echoing the sentiments of nearly everyone contacted by USA TODAY. “I think (Norwegian Cruise Line) is on to something here.”

In addition to its widely praised entertainment, Epic also is winning raves from many observers for its lively nightlight and wide array of dining choices — from a teppanyaki restaurant and sushi bar to French and Italian eateries to an Irish pub. Few ships are as energetic and activity-packed, say many who have seen it.

What sort of vacationer will most like Epic? With more restaurants, lounges and showrooms than almost any other vessel at sea, and everything from a climbing wall to three giant water slides on its top decks, it’s a good fit for fans of the sort of big resort experiences found in Las Vegas and Orlando, say many agents.

Chuck Flagg of the Flagg Agency in Canton, Ga., a Cruise Holidays franchise, is talking Epic up to Las Vegas fans, in particular. “The right person to take a cruise on Norwegian Epic is a first time cruiser who has spent many vacations in Las Vegas to see (its) fantastic shows,” he writes on the agency’s blog, noting that unlike in Las Vegas the big shows on Epic for the most part come at no extra charge.

Writes longtime industry watcher Art Sbarsky of Cruise Week in the for-a-fee newsletters’ latest missive: “If it were somehow possible for Norwegian Epic to dock right on the Las Vegas strip, it would fit right in with the other hotels; with its vast array of dining and drinking locations, entertainment and activity choices, and wide range of accommodation, the ship is the closest the industry has come to emulating Vegas.”