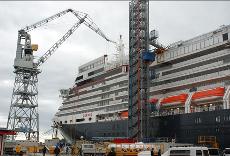 The Cunard Line’s 2,092-passenger Queen Elizabeth under construction at the Fincantieri shipyard in Monfalcone, Italy, on July 30, 2010.
MONFALCONE, Italy — A la carte pricing for restaurant menu items — a relative rarity in the cruise world — may be coming to Cunard Line.

Under one plan under consideration, the high-end French restaurant would charge roughly $6 to $7 for appetizers and $16 to $18 for main courses. Desserts would be an additional $6 to $7.

The cost of dining in many restaurants on cruise ships is included in the base fare of a voyage, and those restaurants that do charge generally levy a flat fee on diners — usually in the range of $15 to $30 per person. Eateries that charge by the plate only are found on a handful of ships.

“A lot of cruise lines have celebrity chefs, and we thought long and hard about it,” says Shanks, speaking during a preview tour Friday of the new vessel at the Fincantieri shipyard near Trieste, Italy. But, in the end, “given our reputation for cuisine, we thought we would create it ourselves.”

Shanks hinted that while the Todd English restaurant on the six-year-old Queen Mary 2 has been successful, the one on the two-year-old Queen Victoria has struggled a bit. The Queen Mary 2, which operates trans-Atlantic crossings to and from New York, is more heavily booked by Americans, who are familiar with the Boston-based celebrity chef, he notes. The England-based Queen Victoria caters more to the British market.

“Todd is particularly successful on the Queen Mary 2 where we have that mix of American and English guests,” Shanks says. “We found it harder on the Queen Victoria.”

The a la carte restaurant pricing on Queen Elizabeth would only be for the Verandah restaurant. Meals in the ship’s main eateries — the Britannia Restaurant, Queens Grill and Princess Grill — still will be included in the ship’s base fare.

The new Queen Elizabeth has been under construction at the Fincantieri shipyard for more than a year, and it is scheduled to be finished in late September. The ship will make its worldwide debut on Oct. 11 in a christening ceremony in Southampton, England. The vessel is a successor to Cunard’s famed QE2, which retired in 2008 after four decades at sea.