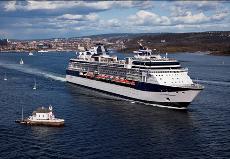 Celebrity Cruises has announced plans for roundtrip voyages out of Istanbul — a first for the line.

The fast-growing company says it will offer three 12-night sailings from the Turkish city in the fall of 2011 on the 2,034-passenger Celebrity Constellation.

The new “Greek Isles and Turkey” voyages — to begin on Sept. 19, Oct. 1 and Oct. 13, 2011, respectively — will include an overnight in port in Istanbul and visits to Ephesus (Kusadasi), Bodrum and Marmaris, Turkey; Rhodes, Santorini, Athens (Piraeus), Mykonos and Chania (Souda), Crete in Greece.

Three of the ports — Bodrum, Marmaris and Chania — are new for Celebrity.

The line says the Istanbul itineraries will be book-ended by Mediterranean sailings on Sept. 7 and Oct. 25, 2011. On Sept. 7, the Constellation will sail a 12-night itinerary from Amsterdam to Istanbul with stops in Brugges, Belgium; Cherbourg, France; Vigo, Spain; Gibraltar, United Kingdom; Sicily, Italy and Athens. On Oct. 25 the ship will sail an 11-night voyage from Istanbul to Barcelona with stops in Athens; Naples, Rome, and Florence, Italy; Provence, France; and Palma de Mallorca.

On Nov. 5, 2011, the Constellation will reposition from Barcelona to Fort Lauderdale with a 14-night trans-Atlantic voyage.