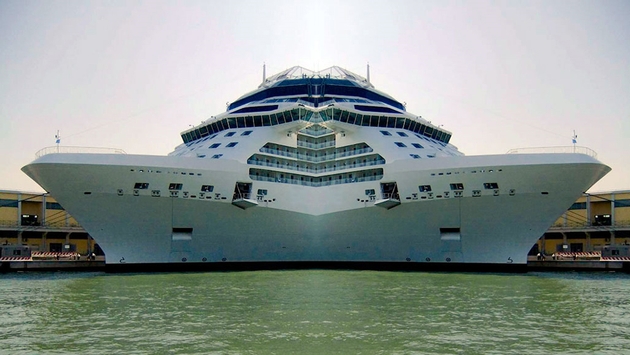 Celebrity Cruises has announced a new EDGE class of ships to first arrive in 2018, but in the meantime, the Millennium-class and Solstice-class dominate the “modern luxury” fleet. There’s probably no single cruise line that I’ve sailed on more than Celebrity, my experience beginning with the now retired Century-class of ships with my parents well before covering the industry professionally. So, I know a thing or two about the vessels and how their features compare.

Starting with the line’s latest and largest ships, the Celebrity Solstice introduced the world to the Solstice class upon its launch in 2008, and a total of five sister ships have set sail, including the newest and most modified of the lineup, the Celebrity Reflection, launched in 2012. I was even privileged to see this vessel under construction at the Meyer Werft shipyard in Germany.

Common to all of the ships is a boutique hotel aesthetic marked by a soaring atrium composed of glass elevators and a suspended living tree right at its heart. Similarly impressive is the initially perceived as gimmicky but surprisingly delightful Lawn Club with real grass on the upper deck. Staterooms are some of the industry’s most comfortable with a well-thought-out layout and larger-than-average bathrooms, and cabinets bridge the beds to provide ample storage.

Dining has been a highlight on Celebrity ships ever since the line’s original family ownership, and the tradition continues to this day with a wide selection of restaurants onboard, ranging from the excellent main dining room to specialty eateries like the French Murano on all the ships of this class and the eclectic Qsine on all but the Solstice and Equinox.

The Equinox and Eclipse have recently introduced the Gastrobar for a fine craft beer selection and the poolside Slush for frozen cocktails, and the Silhouette and Reflection feature the interactive Lawn Club Grill instead of the Hot Glass Show on the other sister ships. The Eclipse also has the World Class Bar for fine drinks in line with fine dining, replacing the former Molecular Bar.

As for entertainment, the Solstice-class ships excel with aerial acrobatics, and the Celebrity Eclipse just pulled back the curtain on “Topper,” one of 18 new shows coming to the Celebrity fleet. Another highlight onboard the sister ships is the fun dancing water display at the pool deck.

Of the quintuplets, the newest Celebrity Reflection evolved most from the original design with an additional set of midship staterooms pushing the pool deck up one level and a bit of the observation lounge displaced to accommodate a new stretch of suites including the Reflection Suite and its signature cantilevered privacy glass-shower overlooking the front of the ship.

The Millennium-class is older, launched between 2000 (Celebrity Millennium) and 2002 (Celebrity Constellation), and a bit more of a hodgepodge over the years as the four ships have been inconsistently “Solsticized.” Now, they are closer than ever to being smaller versions of the Solstice-class with most of the same venues and restaurants.

When first introduced, these ships sported a garish color scheme of white, blue, red and yellow that has thankfully been simplified with the line’s more iconic white and blue bands. Although not quite to the level of the Solstice-class, staterooms are nice, and Celebrity Suites, now with private verandas, are particularly special as they bow out from the side of the ship with unique views down the length of the vessel. As an Apple fanboy, I appreciate the Mac-friendly iLounge found here as on the newer ships.

The fantastic Bistro on Five cafe from the Solstice class has been rolled back to all of these ships, and Qsine has made it to all of them but the Constellation which features Tuscan Grille instead. With some controversy, Tuscan Grille is replacing some of the classic ocean liner-themed restaurants that were originally onboard some of the other sister ships. The S.S. United States restaurant on the Infinity has already made way, and the Normandie on the Summit is next on the chopping block.

The Infinity, as will the Summit, also features the new Rooftop Terrace, a trendy al fresco deck with cool tunes, cocktails and films on an outdoor movie screen. Already newer to the Summit are Liquid, Indulgence and iMagic entertainment offerings. Liquid transforms the Solarium into a nightclub complete with live DJs, enhanced lighting, atmospheric performers and a VIP lounge; Indulgence is a culinary experience with added pop-up performances; and iMagic is a show inspired by historic illusionists and realized with high technology.

Recently carved out of the main dining room on all the Millennium- and Solstice-class ships is Luminae, an exclusive specialty restaurant available complimentarily to Suite Class guests, as well as the introduction of the CanyonRanch Spa Club onboard them all.

The only odd man out from the fleet is the Celebrity Xpedition, but as a very special intimately-sized vessel that sails to the Galapagos Islands exclusively. As the focus of such itineraries is almost solely on the destination, the 100-guest ship just features a handful of essential venues. Only a singular restaurant, bar, grill, lounge, library, guest relations desk, gift shop, exercise room, massage room and spa are featured onboard.

Of course, the future is in the hands of the forthcoming EDGE-class of ships. Little is yet known about this pair of vessels other than that they will be 117,000 tons and carry 2,900 guests, sizing them in between the Millennium- and Solstice-class to accommodate, “small ship itineraries with large ship amenities,” according to Celebrity. The ships will be built at STX France and be delivered in the fall of 2018 and early 2020.