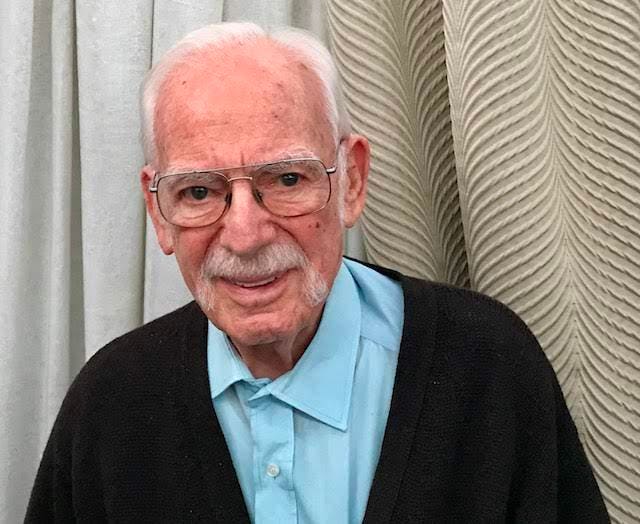 Most guests on Seven Seas Navigator may not find anything unusual about the distinguished-looking man who eats alone every day, at lunch and dinner, at the same corner table of the Compass Rose dining room.

But when I learned that this passenger—whom the crew deferentially refers to as the “Captain”—has been residing on this same ship for more than 13 years, my curiosity was aroused.

Bish, the can-do butler assigned to our stateroom, promised to see if he could arrange an introduction. A few hours later, I was running off to my appointment to meet the Captain—at 4 p.m. teatime, in Galileo’s Lounge on Deck 11.

I knew exactly where to find him because Bish told me that he also takes the same corner seat in the lounge each day, adjacent to a small stage where a pianist or guitarist performs 50s, 60s and 70s music. When I found the Captain, he was sipping his usual, a diet tonic water, on a ship with a complimentary open bar.

At the age of 94, Morton Jablin could easily pass for someone twenty years younger. He is slim, well-groomed and silver-haired. He looks like the retired executive he is, with dark eyes behind his glasses that exude intelligence, confidence and warmth. He’s an engaging conversationalist with a mind and memory that are both remarkably agile.

As our conversation begins, I’m anxious to get to the crux of the matter. Why has he been living on a ship, this particular ship, for so many years?

“I couldn’t achieve this lifestyle anywhere else,” he says. “The crew is overly gracious and kind to me. I can’t think of enough good adjectives. They are unbelievable.” 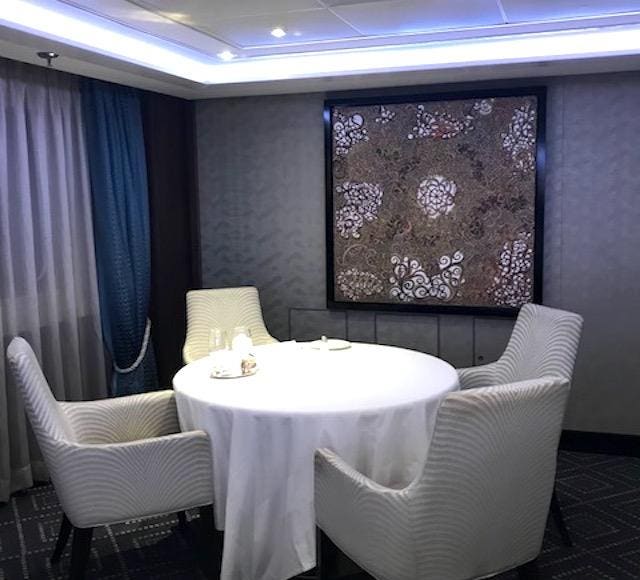 Captain Jablin proudly tells me that he was raised in Brooklyn. After spending time abroad with the U.S. Navy Office of Naval Intelligence, he returned to the States in 1946, where he worked as a registered pharmacist making $65 a week. “My wife Charlotte and I raised two children in what was then a different world,” he says.

While overseas, he met a German textile manufacturer who asked him to introduce lace-making machines to the U.S. market. From that collaboration, the Captain eventually built what became his own successful lace-making business. Since that time, much of the lace industry moved from Europe and the U.S. to China, where labor is cheaper, but his company has managed to stay afloat. (It still owns 45 of the 70 machines that currently produce lace in the U.S.) Captain Jablin retired in 1989 and left the business in the hands of one of his grandsons, now 42.

A mutual love of the sea

“My wife, Charlotte always traveled with me and we made friends with other couples and crew,” he says. The two were avid cruisers, sailing on a number of different cruise lines over more than a half-century.

When one crew member they knew retired from another line to work on a private yacht, he suggested that the Jablins try cruising on Radisson Seven Seas Cruises (which was renamed Regent Seven Seas Cruises in 2006). The couple sailed on Seven Seas Mariner and Seven Seas Voyager for five years. In 2000, they decided to move to Seven Seas Navigator, the smallest ship in the Regent fleet (with fewer than 500 passengers).

When Charlotte passed away 13 years ago, Captain Jablin made Seven SeasNavigator his home. He still maintains a condo in Boca Raton, Florida to keep his “stuff” and to qualify for health benefits and Social Security but it’s been three or four years since he’s set foot there, he says.

About a year and a half ago, after his eyesight began to fail, the Captain could no longer go on shore excursions (except for occasional medical appointments). He says he is now 90% blind. He accepts the limitations posed by his age and health as he lives on board a ship that is sailing all over the world. “Charlotte and I had already been everywhere,” he says.

“I used to get four newspapers, and do Sudokus and crossword puzzles but I haven’t been able to do that either for the last two years,” he says.

Sticking to a routine

Now he is keeping things simple. “My life is very routine but comfortable,” he says. An early riser, he has breakfast in his cabin. He eats lunch and dinner at that corner table in the main dining room, and he appreciates that it is always set in the same way so he has no problem finding the salt.

“The food is excellent overall but I prefer to eat Dover sole at both meals, every day,” he says. He eats alone because he is self-conscious about food not making it to his mouth as neatly as it once did. 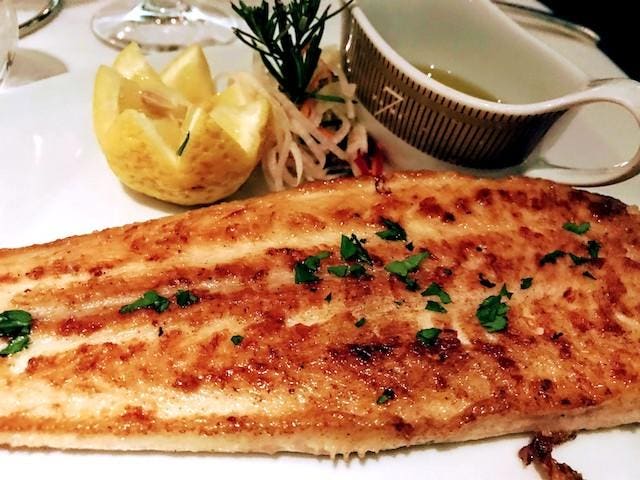 Seven Seas Navigator is an all-suite luxury ship. The cruise line has made minor stateroom accommodations to make things easier for the Captain, one of their most loyal passengers. “They’ve installed brighter lights in my cabin, handrails in the bathroom and a special shaving mirror,” he says.

To stay fit, he exercises regularly. He knows his way around the ship and walks about two hours daily, usually on Deck 7 where the shops are located. “I’m intelligent enough not to walk where I’d have a problem. Nobody is on that deck during the day and as an ex-Navy man, I have my sea legs,” he says.

When I ask whether he ever hits the casino on the same deck, he responds, “I was never a gambler.” He does, however, enjoy some of the entertainment, especially musical performances, on the ship.

Although stridently independent, the Captain maintains family ties. When the ship docks in Miami, both his sons (ages 64 and 68) often come on board to visit, sometimes with wives, grandchildren and great-grandchildren. Occasionally old-timers will come aboard whom he remembers from the days when he cruised with his wife. He’s happy to see them. “At my age, most of my friends are dead,” he says.

A cell phone allows him to stay connected with family in-between visits and he keeps an Amazon Alexa in his cabin, which he uses about once a month to ask a question—like when he wasn’t sure whether Mongolia was an independent nation.

Sometimes people come over to his table to chat and he welcomes nice conversation but he rarely initiates small talk with fellow passengers. He is keenly aware of generational differences between himself and most guests on the ship who are closer to his sons’ ages. The exception: He feels extremely close to the crew, even the entertainers who feel like a family of sorts.

When I ask him if he’s happy, he convinces me that being captain of one’s fate is what’s most important.

“I couldn’t achieve this lifestyle anywhere else. If I need a nurse or doctor, someone is in my cabin within five minutes,” he says. “No matter what the time of day, if I need something, someone is here in 10-15 minutes. If I weren’t on this ship, I would have to have someone living with me,” he says.

“Where else could I feel this secure and safe? Life on board couldn’t be better,” he says. 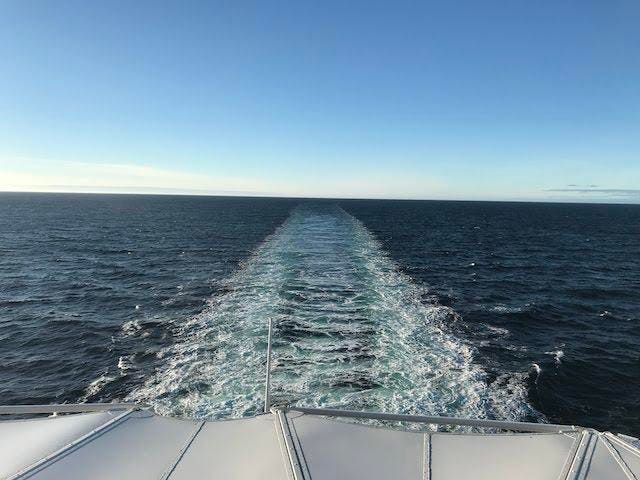 Life couldn’t be any better for the man who has lived on a cruise ship for 13 years.

Under the Flexible Cancellation Plan, which was originally offered for cruises departing through the end of April, guests who make a new booking by March 31, 2022, for itineraries that depart on or before Sept. 30, can cancel for a…https://t.co/C9VrNJ5LLO https://t.co/ALgOCfkQht