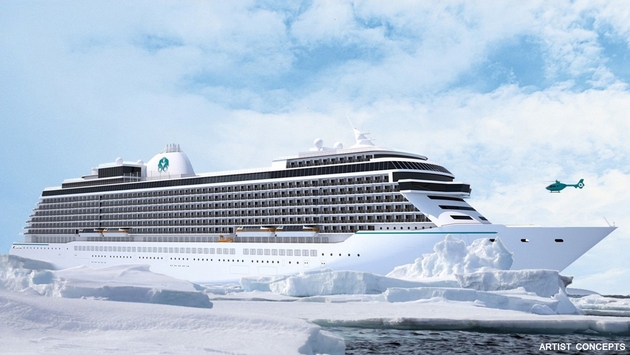 A luxury cruise renaissance is on its way as Crystal Cruises, Regent Seven Seas Cruises, Seabourn Cruise Line and Silversea Cruises all expand their operations from now into 2018 and beyond.

No single line in the group is growing as much as Crystal Cruises as the company, recently purchased by Genting Hong Kong, prepares to introduce entirely new brands and new ships. Until now, the line has consisted primarily of two ships, but now it has three new Exclusive-class vessels (rendered above) on order. Illustrating the magnitude of the company’s growth is Genting HK’s decision to buy the Lloyd Werft shipyard in Germany where they will be built.

Crystal Cruises’ new 1,000-guest ships will be comparable in capacity to the existing Crystal Serenity and Crystal Symphony, but will raise the bar as all-balcony, ice-rated vessels with a one-to-one crew-to-guest ratio and a fleet of submarines, helicopters and pontoon boats onboard. Crystal Residences will even offer private homes, ranging from 600 to more than 4,000 square feet in size, also with an exclusive restaurant and reception. The first new ship is scheduled to set sail in late 2018.

Before then, new Crystal Yacht Cruises will launch with the redesigned 62-guest Crystal Esprit on Dec. 23, 2015, embarking on warm-water expeditions. In fact, the line just detailed its marina and water toys including complimentary water skis, a wakeboard, ocean kayaks, jet skis, zodiacs, in-ocean pool and fishing and snorkel equipment. There’s even a 12-passenger Wider 32-foot super yacht tender for special outings, and for $599 per person, a two-guest C Explorer U-Boat Submarine will journey on 30-minute dives.

Then in 2016, Crystal River Cruises will float out with the refurbished 160-guest Crystal Mozart before building four new riverboats, two with 110 guests and two with 84 guests, at the company’s shipyard. The Crystal Bach, Crystal Debussy, Crystal Mahler and Crystal Ravel will follow in June and August of 2017. They will feature a Palm Court with a dance floor and glass-domed roof, library, fitness center and spa, as well as electric-assisted bikes, kayaks and jet skis.

Also beginning in 2017, Crystal Luxury Air will take flight on exotic 14- and 28-day worldwide trips on a Boeing 777 with 88 lie-flat, first-class seats, lounge and bar, and a 52-guest Boeing 787. Vacations will include luxury hotels, fine dining and local entertainment.

As for Regent Seven Seas Cruises, the luxury line is coming out with the new Seven Seas Explorer, which the line is calling “the most luxurious ship ever built,” on July 20, 2016. Onboard will be an impressive set of decadent features including 375 total suites, sporting the largest verandas in the cruise industry, the creme de la creme of which will be a 3,975-square-foot, two-room Regent Suite situated at the top front of the ship with its own spa and Vista Garden glass-enclosed observation area. 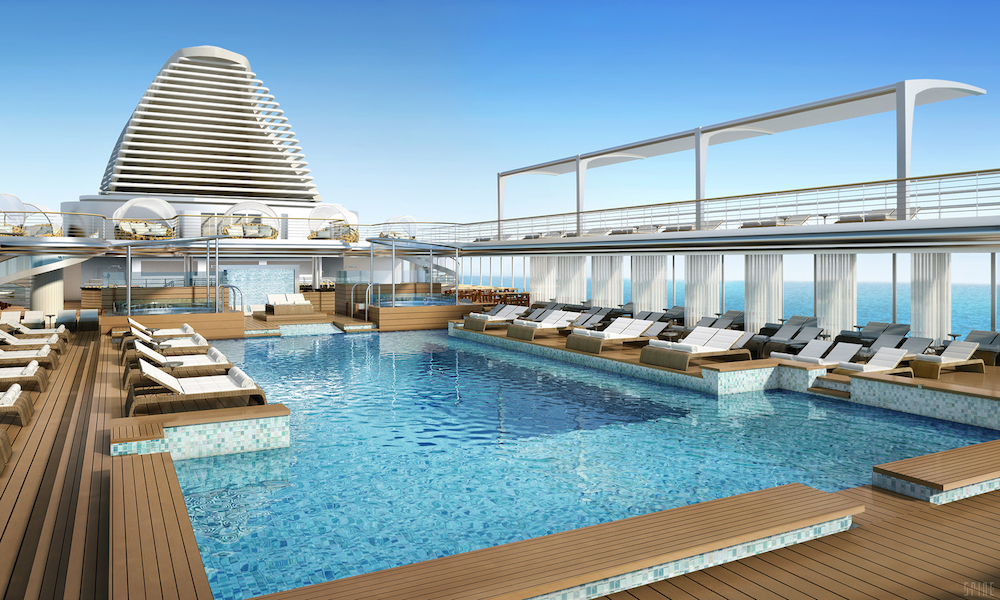 Dining highlights will feature classic favorites like the Prime 7 steakhouse and Compass Rose main dining room. New will be the Pan-Asian Pacific Rim restaurant and a culinary arts kitchen for taking cooking classes. Also, the Canyon Ranch SpaClub will be posh with an outdoor infinity pool, and the main pool deck will be chic with teak woods and circular sunbeds. The Constellation Theater and public observation lounge will beam with vintage elegance.

The 56,000-ton, 750-guest Explorer will first traverse the Mediterranean before heading to Miami, Florida in December 2016.

Later in 2016, Seabourn Cruise Line’s newest Seabourn Encore will set sail with an inaugural itinerary scheduled for January 2017. The more intimate 600-guest luxury liner will be just 40,350-gross-tons in size and feature a second sister ship, the Seabourn Ovation, to be introduced in 2018. Both are based on the country-club style Odyssey-class vessels with one extra deck and expanded public areas this time around. 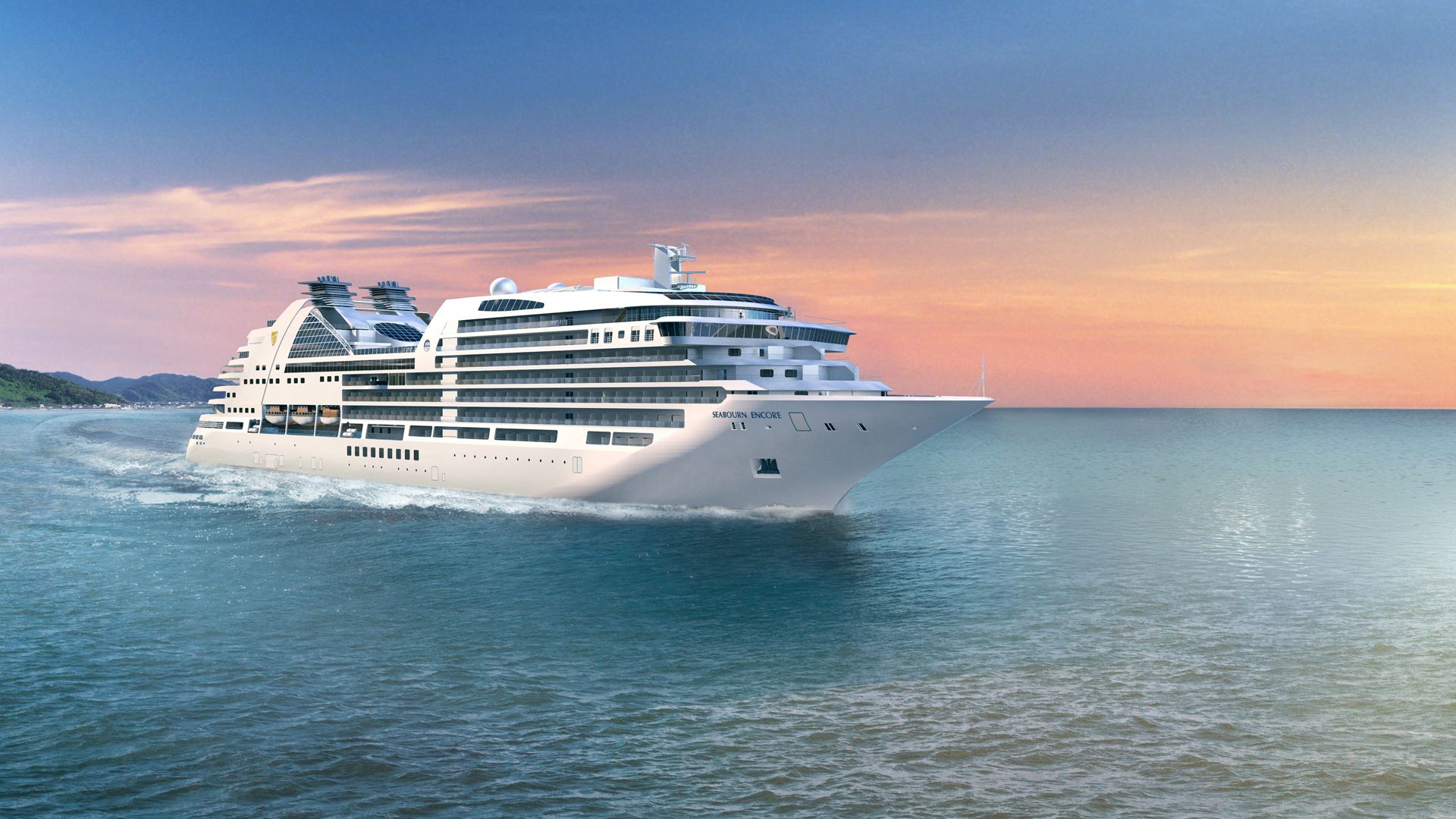 Adam D. Tihany is designing the interiors including The Club, a lounge space for music, dancing and entertainment complete with its own casino and al fresco aft pool deck, and the sleek Grand Salon for production shows and lectures. Private accommodations will be all-suite, all-veranda enclaves, ranging in size from just about 300 to 1,300 square feet, with balconies up to nearly 200 square feet in area. Also exciting to look forward to is the fine dining of recently signed-on celebrity chef Thomas Keller.

The ships are so highly anticipated that Seabourn Ovation’s Jan. 7, 2017 inaugural cruise departing from Singapore sold out in just two days’ time.

Slightly behind the rest of the competition is Silversea Cruises with its impending Silver Muse, which just began its initial construction and is set to come online in spring 2017. She will be a larger version of the line’s current flagship, the Silver Spirit, weighing in at 40,700 GRT with a 596-guest capacity. Details on the ship are still scarce, but it is known that it will feature more large suites than the rest of the fleet and a total of eight dining venues including an all-day pizzeria, a seafood and steakhouse and signature Relais & Châteaux restaurant. 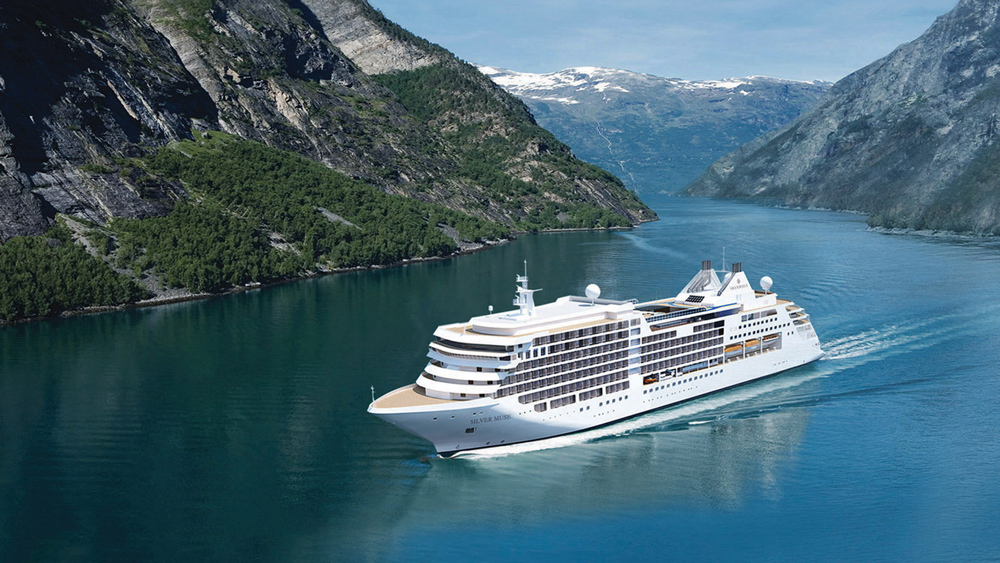 Also, Silversea will be transferring the existing Silver Cloud over to its expeditions fleet after retooling the ship as an ice-class vessel for polar regions. This, a fleet of 18 zodiacs and a reduced capacity of 200-260 guests, will prepare the larger vessel for areas like Antarctica in more stable comfort, especially through the Drake Passage. The ship is expected to relaunch in November 2017. 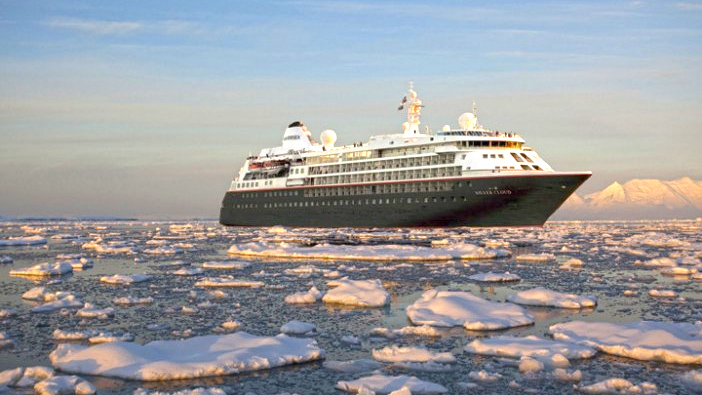 What Does It All Mean?

Well, for you the consumer, it means lots more choice and competition, which is always a good thing. Certainly, the luxury market has always commanded a premium price, but the lines will still have to fight to attract your dollars. If Crystal is smart and doesn’t overextend itself, it will make it very difficult for the other lines to catch up outside of their own niches, at least in volume.

The circumstances mimic those of the mainstream river cruise market, where Viking River Cruises has become so ubiquitous in fleet numbers that the other lines benefit from a halo effect. And now that Crystal is entering the river arena, things are sure to get interesting, especially since Viking Ocean Cruises often approaches luxury quality on the high seas. There’s a lot of interesting crossover here.

Of course, what the other luxury lines are doing shouldn’t be overlooked by any means either. Each has a loyal following and is sure to keep watch on what the others are doing to maintain it. Regent has set very high expectations for itself with the most luxurious ship claim, and Seabourn and Silversea are building upon the foundation of their existing fleet formula. Whether bold innovation or sticking to tried-and-true ways will win is yet to be seen.

The Pixar Day at Sea festivities will include characters from Toy Story, Monsters, Inc., The Incredibles, Finding Nemo and more. A film festival, exclusive merchandise and photo opportunities will also be available as part of the new celebration. #cruises https://t.co/mxgXFGCdRv

Some destinations have shifted gears by changing the definition of “fully vaccinated” — having both doses of a two-dose vaccine or one dose of a single-dose vaccine — to include a booster dose. That means travelers who would be con…https://t.co/fuXG2Df9cM https://t.co/XJCbMIlksT

Traveling around Europe may be about to get less complicated for fully vaccinated travelers from countries within the European Union. https://t.co/zNyhHE6QBd

The protocols, which have been in place since Carnival kicked off its post-pandemic restart, will soon require in-terminal testing for vaccinated guests prior to embarkation, specifically for Carnival’s shorter itineraries (3 or 4 days). #cruises #testing https://t.co/W48Bc8KF1J

The good news now, two years into a pandemic that’s upended the travel industry, is that prices still aren’t a big issue if you’re flying. And we can start thinking about traveling overseas again, but we need to start booking those…https://t.co/8lD6dsf54x https://t.co/rCozUopwRE